Wire shelving is both practical and effective. That’s why so many retailers use it. It can also be beautiful and elegant if you let it. Of course, as with all other types of shelving, it can be used incorrectly. When that happens, you’ll end up with a messy and cluttered store. And your customers won’t think kindly of you.

In a previous article, we looked at retail displays in general, picking the best and worst we’ve ever seen. You can read that piece here. Now it’s time to narrow it down. And by narrowing it down, we mean to look at a specific type of retail shelving, namely wire shelving.

Best: When wire shelving is an extension of your products

There is no getting around the fact that from one angle, you can argue that shelving is shelving. It’s functional and practical and its end goal is to hold your products. Nothing more. Nothing less.

Of course, that’s not entirely true. As mentioned in a previous piece on shelving ideas and finding inspiration, you don’t have to stick to tried and tested retail shelving. In fact, you shouldn’t. Not only is it boring for you as a retailer, It’s boring for your customers too. And since you want to attract customers in to buy your products, you need to think outside of the box.

A perfect example is the below.

There are a number of reasons why it’s great. Firstly, it’s stylish and could easily be at home in a museum let alone in a retail store. Secondly, it invites you in, and you most probably want to interact with it. Maybe pick up a pair of glasses and try them on.

Last but not least, it transcends the idea of shelving and retail displays. And that’s where shelving can be successful: when it becomes an extension of your product to the point that you don’t see it.

Worst: When you don’t look after your wire shelving

One of the problems that can plague wire shelving is that it can deteriorate. Of course, other shelves can deteriorate too. They can break and buckle when mishandled. But we’re not talking about the usual damage that affects all shelving at one time or another.

We’re rather talking about the damage that only affects wire shelving: that is rust.

Below is an example.

In some instances, you could argue it doesn’t matter. But that’s only if you run a nursery and shelve plants so dirt and rust is expected and customers might not mind. A vintage store might use rusty shelving to complement the aesthetic appeal of shopping for old items. But that still doesn’t mean that it should be welcomed.

Imagine a customer sees such a shelf in your store and you’re a food retailer? They’d be disgusted and never return. They’ll also tell everyone they know.

If you use wire (and metal) shelving, you must look after it. That includes understanding the pros and cons of each type. For example, chrome is susceptible to rust so it’s best used indoors. Epoxy or stainless steel are better options if you work outdoors or have products that need to be kept cool.

Best: When it presents your products without fuss

As much as thinking outside of the box can attract attention, so too can shelving that presents your products without fuss.

In other words, shelving that’s clean and uncluttered and focuses on your products. Need an example? See the below image. It’s of a boutique which can be found in Mykonos, Greece. You can see more images on Yellowtrace.com.au. 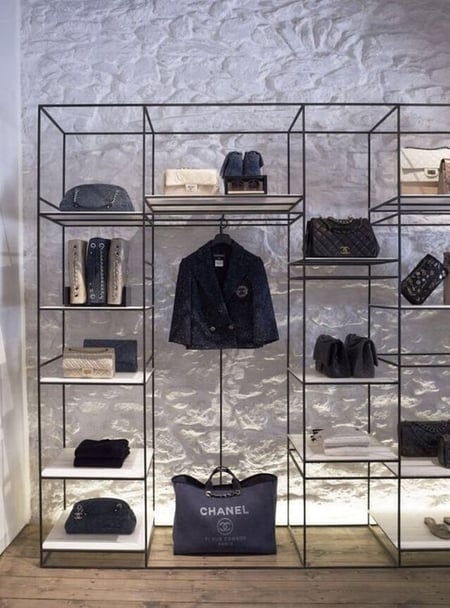 The beauty of the above shelving is plain to see: it’s clean and uncluttered. The products can also ‘breathe’ as they each have their own space. More than that, there aren’t any distractions when you look at it. It’s all about the products. Even the background is plain white so that nothing else takes away the focus. A bonus is the different levels of this shelving caters for each product in the store.

Another way such shelving could be used effectively (in a different store) is if each level had a separate item of clothing that would make up a finished outfit that is positioned in the middle. That would include everything from shoes to pants to jackets, shirts or a dress depending on the finished outfit. Even jewelry if the store sells it and it complements the outfit.

Worst: When it’s overpacked and messy

We’ve just mentioned the beauty of an uncluttered shelf that has a specific focus. It’s one of the characteristics of a great retail display let alone retail shelving. That’s because it makes it easier for your customers to shop your stores.

It then stands to reason that the opposite - having no focus or an overstocked shelf - is a characteristic of bad retail shelving.

Need convincing? Just look at the below image.

If it doesn’t have you cringing uncomfortably, why not? Just because you can pack a lot of products (in this case clothing) onto your shelf doesn’t mean you should do it. How do you expect your customers to shop this shelf? And how will your store look after they have attempted to shop it? Most likely, you’ll have merchandise everywhere, including on the floor.

The reasons for the above is often a result of either over ordering stock in general or not ordering the right stock for your specific store. For either case, it’s necessary to relook your stock turn to see where you can improve it so that you don’t waste money.

It’s also worth setting yourself a target congestion percentage that will work for your categories rather than against it.

3 Signs Your Retail Shelving Is Killing Your Business

While it might not seem so, the retail shelving you use in your stores has a major impact on your success. The right type of ...
Start Reading
Darren Gilbert Nov 1, 2017 4:45:12 PM 5 min read

When it comes to shelving ideas for your store, you’re only limited by your imagination. You have your traditional retail ...
Start Reading
Darren Gilbert Jun 13, 2019 5:00:37 PM 6 min read

4 Ways to Maximise Your Gondola Shelving

When it comes to the different types of retail shelving, the most common one is your gondola shelving. You’re likely to find ...
Start Reading