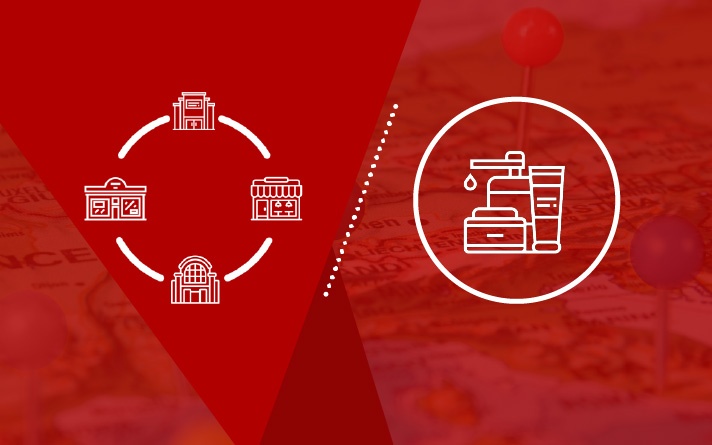 Store clustering, and everything that goes with it, is a valuable exercise in understanding your customers. More than that, it’s an opportunity for you to meet their needs, ultimately providing them with a better shopping experience. And consistently so. Which retailer wouldn’t want to do that?

What is store clustering?

Before we go any further, it’s important to first look at the definition of store clustering. What is it exactly?

Also referred to as “store grouping” it’s straightforward and simple to understand. That’s because as the name suggests, it’s essentially a way of grouping your stores based on similarities. These similarities can be anything from LSM, size, and demographics to past sales performance data. The list can go on.

The fact that you can group your stores around any characteristic shows the power that comes with doing such an exercise. It also needs to be pointed out that all stores need to consider doing this. In fact, we’d go so far as to say that it’s a non-negotiable.

Why? Simple: without deciding on your clustering strategy first, you can’t begin your assortment planning process. Well, you can start it, of course. But you will be limiting your success. After all, imagine trying to decide on a range of products to stock in your stores when you have no idea who your customers are or what they want. That’s madness. How will you ever be able to cater for them? The short answer is obvious: you won’t be able to.

On the other hand, by completing a clustering exercise first, you’re laying down a solid foundation on which you can build. These building blocks will eventually lead your stores to offer your customers the right product at the right place and time. And it will be highly personalised.

Still unsure? Then it’s worth reading this piece to find out why shoppers prefer stores to localise their product assortment.

As mentioned above, by doing a store clustering exercise, you are able to group your stores around a variety of different characteristics.

Which you choose does depends largely on your overall retail strategy. That is to say that while each strategy has its own positives and negatives, neither is absolutely wrong. As noted previously, it’s crucial you decide on at least one of them before opening a new store.

So what is each strategy like? Let’s take a closer look.

The first - store-based clustering - is the simplest of the two different store clustering strategies. That’s because this strategy groups entire stores together because they are seen as similar because of their LSM, size or demographics.

As you can see below (also depicted in the infographic that follows) are eight stores that have been arranged into three different clusters. 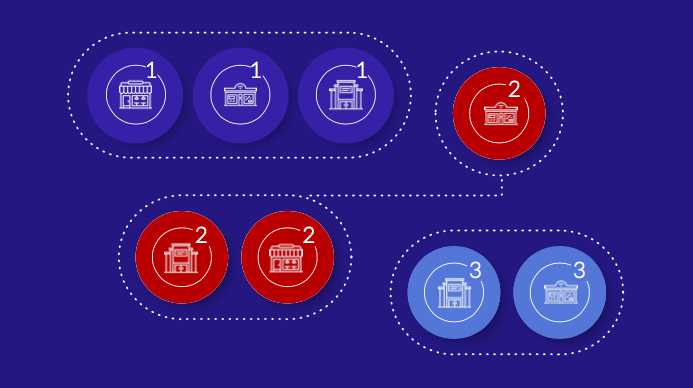 What you’re looking at is essentially this: Every dark blue store labelled ‘1’ not only has the same categories as each other but each category will house the same range of products. The same for the red and light blue stores.

This is the big picture view and it often takes the form of what is known as the nine-box cluster grid. Essentially, in using this grid, you have two axes. Your X axis represents the size of your stores while your Y axis is either the LSM measurement you’re using or your prefered range.

The problem that comes in when choosing to follow a store-based clustering strategy is that you’re disregarding an important fact. That fact is this: your categories should be treated differently so that you can cater for your target market.

Of course, that doesn’t mean that stores shouldn’t use this strategy. Remember, this isn’t about pointing out which strategy is right and which is wrong. This is rather about presenting options.

For example, if you’re a small retailer group who has a number of stores that are all both similar in size and have the same range of products, this strategy is worth considering.

As you can see below (also depicted in the infographic that follows) we’ve taken the same eight stores as above. But instead of grouping them by store, we’ve grouped them by category. 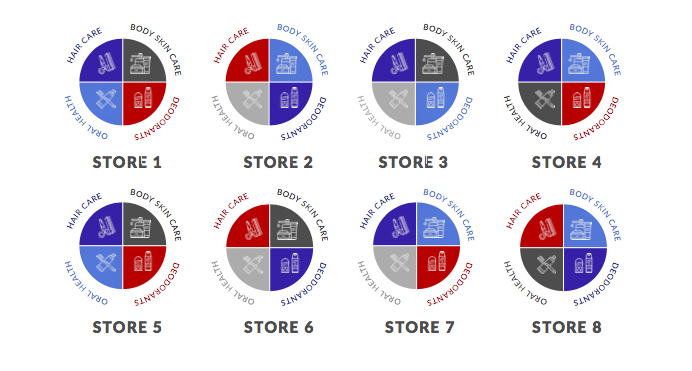 The difference should be plain to see. What you have are eight stores that are all different in terms of categories. That’s even though all stores are part of the same retail group.

Of course, that means that this strategy is a lot more complicated and implementing it in-store does take time and effort. But that’s the point of following this strategy. In choosing to follow it, you’re able to cater for different markets.

For example, Store 1 and Store 2 have a completely different target market when it comes to the Haircare category. Instead of simply providing the same range of products for that category, they’ve gone deeper to look at which products are selling so they can stock more of them. As a result, they’re able to provide a more personalised shopping experience for their customers.

Just to note, you’ll see that Store 1 and Store 5 in the above image have the exact same categories. In the context of category-based clustering, that simply means that after looking at all of the retail data, it makes sense to have the same categories (and thus the same range of products).

There are many benefits to grouping similar stores together. For one, it gives you the ability to meet the needs of your ...
Start Reading
Darren Gilbert Sep 26, 2018 5:27:05 PM 13 min read

5 Store Clustering Mistakes That You Should Avoid

There is no doubt about the fact that performing a store clustering exercise is necessary. However, merely completing one is ...
Start Reading
Erin Daubinet Jul 12, 2019 1:17:42 PM 4 min read

Why Should Your Store Consider Dynamic Clustering?

As a modern retailer, you have a unique customer base that you need to understand and target for your business to gain a ...
Start Reading